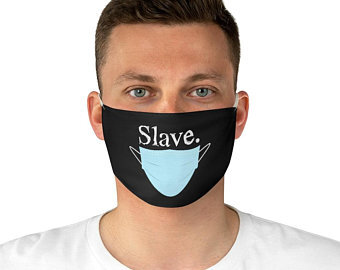 NEW YORK (Reuters) - The head of the U.S. Centers for Disease Control and Prevention said on Sunday it is "absolutely" too soon to lift mask mandates, citing daily COVID-19 case numbers that despite recent declines remain more than double the levels seen last summer.

Appearing on NBC's "Meet the Press," Walensky said preventing further surges of infection (ie Mask Mandates) is key to safely reopening schools and regaining some level of social normalcy until collective COVID-19 immunity can be achieved through mass vaccinations.

Let that last part sink in for a moment. The psychological, physical and economic torture you have endured for the past year will continue until until collective COVID-19 immunity can be achieved through mass vaccinations.

Ohhhh. You thought...No...Yeah sorry. Last year when we said Americans can go back to normal after we achieve herd immunity through mass vaccination we didn't mean just Americans. We meant the entire 8 billion people on the planet. We gotta big job ahead of us. Roll up your sleeves and hunker down.


Fake president Joe Biden ran on a platform that most Americans wouldn't vote for which is why they had to cheat in order to get him in to office. One of these tenants was a federal mask mandate. It applies to all federal property which makes it more symbolic than anything else, but the implications are clear. As long as Biden is sitting in the White House the CDC and other figureheads like Anthony Fauci will be 'recommending' to all 50 states to continue to wear face coverings, social distance and the whole list of do's and don'ts for the unforeseeable future. Maybe permanently.

Now that the Covid-19 vaccines are being distributed en mass to the public we can build up immunity and go back to normal. That was in 2020. Its 2021 and the narrative has officially changed to,"Every person on the planet will remain under lockdown and wear their mask, socially distance until every person on the planet is vaccinated...twice!! When we accomplish that we'll change it to every six months. And so forth.

The media has been pushing this 'we're all in this together' message since the beginning, but I'm not sure if Americans understands what that implies.

This is a problem—and not just for India. If people skip their second doses, or even if they delay the doses beyond the recommended time frame, it gives the coronavirus more chances to re-arm itself—to mutate by chance in a way that could lend it high resistance to the vaccines we have. If that mutant, resistant form spreads, a year’s worth of vaccine research could be overwhelmed by a fierce new wave of disease.

The 'new strain' and 'mutated virus' narrative has already been used. Literally a day after the first vaccines were given to health care workers in early January. It will continue to be used as more people obey health authorities and take the shot. You can't please these people. It will never be enough.

The coronavirus is still around, and unless it’s stopped dead in its tracks by a comprehensive immunization campaign, it will keep spreading. Viruses mutate in warm bodies. India has 1.3 billion of them.

We're talking about 8 billion people getting two doses. That's 16 billion vaccines in one year. Logistically, that seems impossible but who really knows. Pfizer just announced they were 'hopeful' that they can deliver two billion by the end of the year. There's Moderna, AstraZeneca, Russia, China and India also producing vaccines. Assuming they can make 2 billion each that's 12 billion.

This is just conjecture and rough estimation, but giving them the benefit of the doubt they will always fall short of vaccinating all 8 billion people within a certain time frame. And if they do, they will announce a new strain has mutated and we have to re-vaccinate.

That's my point here. The news will portray it as a 'failure.' In reality it will have been a success. Trillions of dollars made by big global corporations for producing an experimental vaccine that doesn't prevent you from getting Covid-19 or spreading it, has severe side effects(manipulates your DNA) and is being used for a virus that kills the same number of people as the seasonal flu. Meanwhile, the freedoms you gave up like free speech and your jobs will not return. That's my other point.

Even if 16 billion vaccines are produced in said time frame and the virus doesn't mutate you have another problem. People don't want to take the vaccine. I've covered this yesterday, Why Doctors & Nurses Don't Want the Covid-19 Vaccine':

Like every other news article I come across it lies and gives another reason as to why people aren't vaccinating. In this case, not receiving the second dose as recommended. They say its because of those who  have been infected already have immunity. Duh...But then it goes and admits at the bottom of the article that the French are vaccine 'skeptics.'

The French health authority Haute Autorite de Sante has recommended that only a single shot of COVID-19 vaccine should be given to people who have already been infected with COVID-19.

The HAS said in a statement that people previously infected retain an immunity.

France began its vaccine rollout in January ...However, the country faces a long-standing battle against vaccine-sceptics, with more than 40% of its population saying they would not be willing to accept immunisation if it was offered.

People's willingness to get vaccinated against COVID-19 is rising around the world and more than half of those questioned said they would take the shot if it were offered next week, an updated survey of global vaccine confidence found on Thursday.

They have to begin by spinning the truth they're about to deliver into a lie. That more people than ever want to take their experimental vaccine while everyday more stories about people not taking their vaccine come out.

But attitudes and confidence vary widely in the 15 countries covered in the survey, with France showing high levels of skepticism and some Asian countries (Australia, Japan, South Korea and Singapore) showing declining trust in vaccines.

You will continue to see more articles like the ones above. We are living under a global governmental system run by a private group of technocrats. This is their current policy. To continue to usurp national sovereignty from each nation on the planet under the guise of a fake pandemic, climate change and never ending economic/political crisis (Engineered by them).

You will see more articles like this as well:

People in India or France not taking a second vaccine dose effects you. It means you will have to keep wearing your mask. It means you can't sit down with your family and enjoy Thanksgiving because some knuckleheads in Japan were scared that they were going to go into anaphylactic shock after taking the shot.

It means reduced work hours, no work hours, no money to pay the bills because some selfish anti-vaxxers in Peru are afraid that they're going to suffer neurological brain damage after taking the vaccine.

It means you will not attend school, see your friends or play sports until those crazy conspiracy theorist in South Africa start participating in the experiment.

You will have to stand 6 feet apart from people... You'll never see their faces again...You'll communicate through plexiglass and face mask...You won't be going out to a pub/bar to catch up with your friends because some a**holes in Ireland are spreading misinformation about the safety of the Covid-19 vaccines.

As the CDC chief says,"Whether Americans can look forward to walking down the street without wearing a mask by the end of the year "very much depends on how we behave right now," she said."

We're all in this together. 16 billion vaccines pumped into the bodies of 8 billion people by 2022. We can do this.