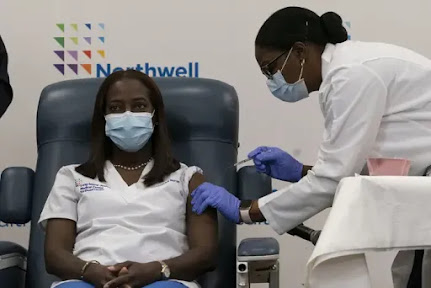 There's a reason why I refer to the "long awaited" COVID-19 vaccine as experimental. It's because this isn't a normal vaccine. And because the former Vice President at Pfizer says that its experimental.

“If any such vaccine is approved for use under any circumstances that are not EXPLICITLY experimental, I believe that recipients are being misled to a criminal extent. This is because there are precisely zero human volunteers for…whom there could possibly be more than a few months past-dose safety information,” says Dr. Michael Yeadon, former Pfiezer VP and spent 32 years working in pharmaceutical R&D.

Despite the media downplaying possible side effects as conspiracy theory, two hospital workers suffered anaphylactic shock just days before the FDA approved it.

A health care worker in Alaska had a serious allergic reaction after getting Pfizer’s coronavirus vaccine Tuesday, symptoms that emerged within minutes and required an overnight hospital stay.

The middle-aged worker had no history of allergies but had an anaphylactic reaction that began 10 minutes after receiving the vaccine at Bartlett Regional Hospital in Juneau, Alaska, a hospital official said. She experienced a rash over her face and torso, shortness of breath and an elevated heart rate.

I've covered this in my recent GGN video reports. The headline was, "Coronavirus Vaccine Trial Subjects Report Extreme Exhaustion, Shortness of Breath, Day-Long Headaches & Shaking So Violently That One of Them Cracked a Tooth."

These are all symptoms of neurological damage. Recently, a test subject in India tried suing after experiencing brain damage.

In the article it states that CNBC goes on to explain that the study participants then claimed all the pain, “was worth it.”

Dr. Lindy Jones, the hospital’s emergency department medical director, said the worker was first given a shot of epinephrine, a standard treatment for severe allergic reactions. Her symptoms subsided but then reemerged, and she was treated with steroids and an epinephrine drip.

When doctors tried to stop the drip, her symptoms reemerged yet again, so the woman was moved to the intensive care unit, observed throughout the night, then weaned off the drip early Wednesday morning, Jones said.

He said the woman felt well, remained enthusiastic about the vaccine and was set to be discharged later Wednesday.

It sounds like the women almost died but nothing to worry about here. All is well.

Although the Pfizer vaccine was shown to be safe and about 95% effective in a clinical trial involving 44,000 participants, the Alaska case will likely intensify concerns about possible side effects.

People who would soon be human guinea pigs and various doctors were concerned about the 'possible side effects' for months, but were labeled 'conspiracy theorist,' fact checked and even censored.

Experts described the woman’s symptoms as potentially life-threatening and said that they may prompt calls for tighter guidelines to ensure that recipients are carefully monitored for adverse reactions.

Being that they don't what the hell is going happen, experts have already stated that Google & Oracle will monitor Americans who get the Covid-19 vaccine for up to two years.

The bad news is this person had no history of allergies and still had adverse reactions. The good news is that the great experiment continues.

I don’t think this means we should pause" vaccine distribution, he said. “Not at all.” But he said researchers need to figure out “what component of the vaccine is causing this reaction,” says Dr. Paul Offit, a vaccine expert and member of an outside advisory panel that recommended the Food and Drug Administration authorize the Pfizer vaccine for emergency use.

The only way they can continue these insane COVID-19 restrictions is under a national emergency. We are living under a form of martial law. Limits on group size, curfews, restriction of travel without vaccine certificates. Police terrorizing the public over mask/ social distancing compliance. The military conducting contact tracing and testing. The vaccine development (Operation Warp Speed) itself was coordinated by the military.

These people aren't insane. They are evil. They know about the 'possible side effects." They know what they are doing. Remember when I covered this article:  Covid-19 Vaccine May Have Unpleasant Side Effects. That Will Mean It's Working

The only way they can approve this EXPERIMENTAL vaccine is for EMERGENCY use because they lack the time needed for evaluation. The companies are not liable for the permanent damage to your body.

I've also covered the different groups who have been pushing for mandatory vaccination and proof that you received your COVID-19 vaccine in order to travel, work, shop etc.

They may not hold you down and inject you with this crap, but they'll make it impossible to doing anything without it. This is the New Normal they've been talking about. Comply or else. 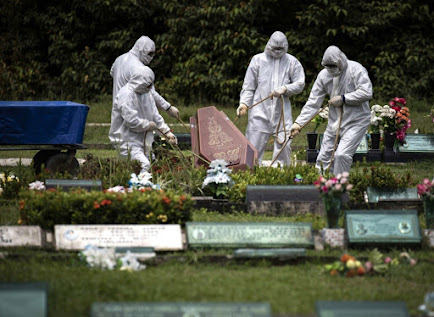