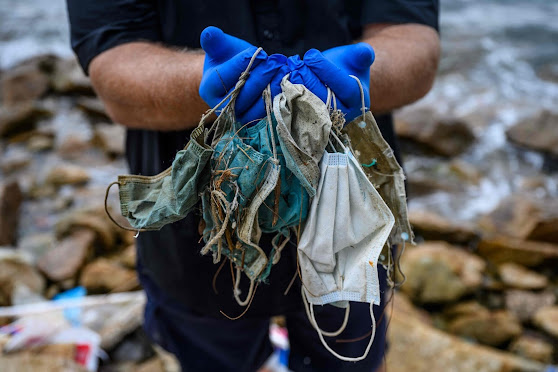 Some states have recently lifted mask requirements. Not having to wear those symbols of subjugation anymore is great news, but unfortunately and predictably businesses are still going to force their customers to wear them. I was amazed at how easily people around me complied with face covering requirements when they first started. A year later and they are still complying. Even though there is sufficient evidence that they are not effective and the Covid-19 virus was not as bad as they claimed. Simply amazing.

How many times must Americans be lied to before they start to wake up. Apparently, that is never going to happen which doesn't bode well for the rest of us. Their shameful persistent compliance is raising the bar on state/ corporate tyranny. The technocrats are always gauging how much they can push us. At this point it's clear that people would hop on one leg in order to enter a store. Maybe they would be willing to be sterilized. Or volunteer to be euthanized at aged 50.

The government, especially the governors were the initial enforcers of this ridiculous mask mandate. They had emergency powers under the pretext of a super deadly pandemic where only 99% of the people who get it survive. It was worth forcing the citizenry to stay locked in their homes for three months (much more in Europe), destroy their economies and cause untold physical and psychological problems as a result.

Now that people have grown accustomed to face coverings it has become normal. That was the point. To normalize the abnormal. The same thing is being done with vaccine cards. Scanning your phone in order to enter a store is coming soon. If you aren't vaccinated you don't shop. The technocrats use government authority to implement these policies. When people have been conditioned to accept it they can end the mandates, but private corporations can still enforce them.

Texas recently lifted their mask mandate. A customer who wasn't covering their face was arrested and removed from the property.

A woman arrested at a bank last week after she refused to wear a face mask cried “police brutality” as she was handcuffed ― but fellow customers responded in a chorus of “No, no it is not.”

The incident occurred at a Bank of America. Much like climate change and pro-LGBT, corporate America is 100% on board with the Covid-19 lie. And they will all fall in line when it comes to vaccine card requirements. They all parrot the same thing. And like every other occasion they will require that you still wear a mask and be vaccinated for your own safety, the safety of others and their employees.

You don't want to endanger others do you?

I talked about this in my last article so I won't go much further into it. Kroger, Starbucks and Target announced they will still require face coverings.

Then I saw a local news station announcing that Indiana will lift the mask requirements. I have to admit I was surprised and pleased. But the local news much like national news outlets sees this as a terrible thing. They interviewed a restaurant owner who said he was still going to require customers to wear mask. This was not  a big corporate chain or anything. He also said that he was going to pay a bonus to his employees who received the experimental Covid-19 shot.

Its only a matter of time until businesses require you to get vaccinated in order to be hired or even keep your job. And small time scumbags such as this restaurant owner will comply.

The local news dedicates its first ten minutes to the Covid-19 hoax. They brought on a health official who said they wanted 75% of residents vaccinated and that they would have to educate the rest of us on the importance of participating in the final stage of the trials.

You have to remember, businesses were fined for not enforcing the mask mandate. In places like Pennsylvania people were given rewards for calling the police on those who were not wearing a mask. Indiana initially tried to classify non-compliance as a criminal offense(misdemeanor), but there was public outcry and it wasn't passed. This created a tense atmosphere. Pitting the government against businesses and businesses against customers.

The local gym/pool that I go to is a big facility that is tied in with the county. Its public/ private. And of course they are super strict. The swim instructors that are in the pool still have to wear a face mask. I have to wear a mask until the last second before I enter the water. I see the people on treadmills and weightlifting wearing a mask and I'm left thinking...this is insane. Why are we letting them do this to us?

I'm also thinking...This place is still going to require face mask after the state lifts the mandate on April 6th. Who knows? I tend to be a bit pessimistic about things. Mostly because of what I know and what I've seen. Maybe people were right. Now that they removed President Trump from office Covid-19 will fade away.

There is a basis for that logic. Covid-19 accomplished many things but one in particular: Mail-In ballots allowed massive fraud to take place and overturn the election.

With Trump out of the way the globalist can continue pushing the other hoax. Climate Change. Both achieve the same goals of creating a scientific technocracy that institute radical population reduction measures.

I wouldn't be surprised if we are told to keep wearing our mask to fight climate change. After all, you're not exhaling CO2 anymore.