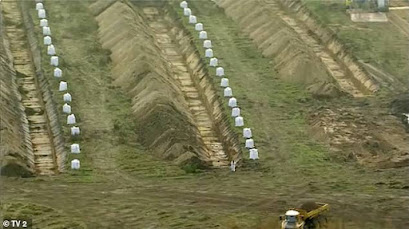 In their great haste to prevent mass death and further destroy their economy Denmark decided to cull millions of mink, but they made one fatal mistake. They left rotting mink lying in the streets.

It was so bad that residents complained of the smell.

Danes living near mass mink graves in Denmark have complained of the smell - as trucks spilled bodies of the culled animals across roads in horrifying scenes.

Police and medics were this week forced to issue a warning about the smell from mass graves at Holstebro and Karup, where trenches have been dug to deal with the bodies of millions of animals killed amid coronavirus fears.

They were forced to deny that the smell is dangerous to health, but warned those living in the area and using walking paths that it will be noticeable.

Meanwhile thousands of dead animals were found along a 12-mile stretch of road, having fallen from a truck on their way to be buried. 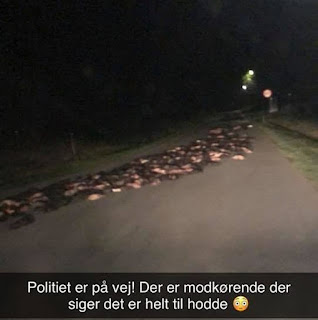 Decomposing mink buried in mass graves in Denmark after being culled because of coronavirus fears may have contaminated the groundwater, local radio has reported.

Denmark, the world’s largest exporter of mink fur, announced early last month it would cull up to 15 million mink after discovering a mutated version of the virus that could have jeopardised the effectiveness  of future vaccines.

I'm not sure how they made that connection, especially since the vaccine isn't even effective to begin with.

Unable to incinerate such a large number of dead animals at once, authorities buried millions in vast, shallow 2-metre pits in a military training area in West Jutland, from which some recently began emerging as their bodies filled with gases.

Danish media said on Thursday parliament was to launch an inquiry in the affair... a study for the environmental protection agency had concluded groundwater in the area may already have become polluted and urged authorities to take rapid action.

So the government contaminated the water supply in the name of protecting public health. The good news is they might have a definitive answer by next year sometime. That's rapid action.

The agency said this week it did not expect the conclusions of a more wide-ranging survey of the environmental impact of the mass burials sites, which have been placed under 24-hour guard, to be ready before the new year.

In fact the government says, "what bodies?"

The ministry of food, agriculture and fisheries also conceded on Thursday it could not say with certainty where or how 4,700 tonnes – or about 1.5 million – dead mink had been disposed of, state broadcaster Danmarks Radio reported on Thursday.

“It may seem wildly questionable when you hear it, but we cannot account for every mink,” agriculture minister Rasmus Prehn, said. “You can tear your hair out that it can be like that, but it is unfortunately the truth. It is not unlikely that more have been buried than thought, that is our best bet at present.”

That's not good enough! This reminds me of a certain event that took place in WWII to a certain group of people. At least in time the 6 million minks will be remembered. There will be museums, education curriculum, foundations, charitable organizations, movies etc.