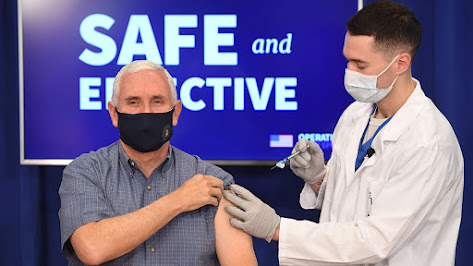 In the latest PR stunt to convince weary Americans to take the gene altering vaccine, Vice President Pence decided to take one for team and roll up his sleeve.

Vice President Mike Pence received the Covid-19 vaccine in a televised appearance Friday morning in an effort to promote its safety and boost public confidence in its effectiveness.

"I didn't feel a thing. Well done," Pence said in remarks after receiving the shot in his left arm.

Pence called it a "medical miracle," saying that the average vaccine usually takes eight to 12 years to develop, manufacture and distribute. "But we're on track here in the United States to administer millions of doses to the American people in less than one year. It is a miracle indeed," he said.

You see the reason it usually takes 8-12 years is so that safety/efficacy trials can take place and be studied before FDA approval.

Its not really a miracle. You just declare a pandemic even know there isn't one, then declare a national emergency so you can skip those years of trials and grant yourself zero liability so you are not responsible WHEN the experimental vaccine starts injuring people. Its a great system.

It's funny because Pence has to go out of his way to say that they didn't do exactly what they did. This is how stupid they think you are.

"Karen and I wanted to step forward and take this vaccine to assure the American people that while we cut red tape, we cut no corners," Pence added.

He's standing in front of a sign that says,"Safe and Effective," when the vaccine is clearly not safe nor is it effective. That's a fact. A nurse volunteered to be a guinea pig on Tuesday and almost died. And even Fauci and the CEO of  Pfizer had to admit that this vaccine may prevent the sniffles, but not stop transmission of the virus.

It's unclear if President Donald Trump will receive the Covid-19 vaccine. Trump has said he looks forward to getting the vaccine "at the appropriate time." He and first lady Melania Trump recovered from Covid-19 in October.

Well, they had a 99% chance of surviving so...But I find it a little strange that Trump was out there cheer-leading for this vaccine as the greatest thing since WD-40 and now he's not going to take it himself.

Maybe the "appropriate time" is after enough people don't immediately die from taking it. Remember, this vaccine is experimental. The public are the final test subjects.

I don't think he believed in this flu hoax thing from the beginning. He was not for lockdowns or mask wearing etc. The scaremongers like Fauci were saying the only way to end the pandemic was when a vaccine became available. 12-18 months. That would've been March 2021-Sept. 2021. The extra time is not because they care about your safety. Its about conditioning the public to accept permanent lockdowns/ restrictions.

Fauci even made a statement days before the official announcement of FDA approval and rollout that Americans could expect a vaccine in the spring. It makes him gitty all over to go on TV and tell Americans he's canceling Christmas over the flu.

Fauci is operating on a separate timeline. One that will drag things out for as long as possible. Trump had his own timeline and pressured the FDA to get it approved ASAP. Maybe it was for political reasons. To show people he did something to end the pandemic. Trump should've just come out in March and said this whole thing is hoax. Most of his supporters believed COVID-19 was over-hyped. Instead he's going to be blamed when people die and get injured from these experimental vaccines.

Pfizer showed their true colors when they decided to wait a few days after the election to announce the vaccine's readiness. Pure coincidence.

Un-elected president-elect Biden will wait to get his experimental vaccine as well.

"I don't want to get ahead of the line, but I want to make sure we demonstrate to the American people that it is safe to take," Biden told reporters.

That's very admirable that Biden and Trump are volunteering to go to the back of the line, but I think it has more to do with "ensuring continuity of government" as USA today reports.

This whole thing is getting out of hand. Its so bad that they have to do these cheesy PR stunts of politicians, actors, medical workers getting the shot in order to coerce the public to take the vaccine. At the end of the day the Globalist can't let both the President and the incoming fake president both going down at the same time. Its bad business policy. And bad publicity.

I mentioned in a recent article that there's a good chance that the vaccines that these people are taking are most likely just saline water or very mild doses. There is too much at stake right now to have people like the vice president going into anaphylactic shock on live television.

Biden appears to already have some sort of advanced dementia/ alzheimers disease. These vaccines have shown to cause neurological damage. If he takes that shot he could end up forgetting that he actually won the election and concede. Which wouldn't be a bad thing.

These people don't fight fair. And science is their religion. 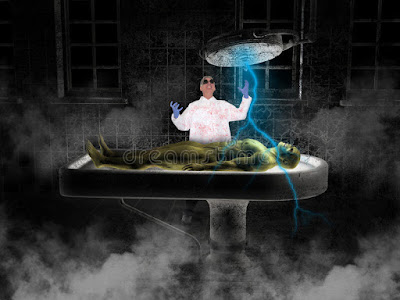 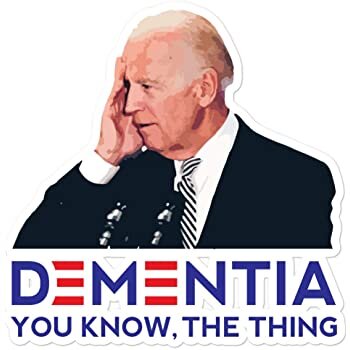 The only thing better than a puppet like Barack Obama or George W. Bush is a senile old man who can barely form a coherent sentence. His only duty is to sign documents and read a teleprompter much like his predecessors. The only difference is that although George W. Bush appeared to be kinda dumb he and Obama were able to go out in public, take questions from the press and participate in PR campaigns.  We all witnessed something strange going on during the 2020 presidential debates where it appeared Joe Biden was being told what to say through an earpiece and possibly wearing augmented contact lenses. He was also very sleepy and giggly. It was actually quite annoying to watch him constantly grinning while being presented with serious issues.  Photos of his suspected earpiece and contact lenses went viral. During the next debate his eye color was normal and he appeared to be speaking more clearly. But it didn't last long. Halfway through the debate he started forgetting stuff