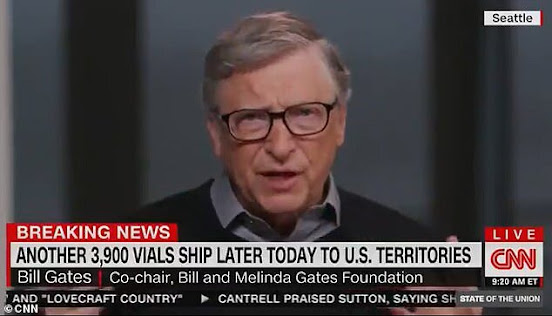 The day after the experimental COVID-19 vaccine arrived news of a super spreading mutation in the virus had occurred. This of course was a lie in order to justify more lockdowns. The "new strain" narrative will be rolled out every year by the 'experts' for years to come. This means an annual DNA altering vaccine and an up-to-date vaccine passport will eventually be required everywhere in order to do everything.

There was not much optimism among the masses to be participants in the last stage of clinical trials. I mean..Who would right? Its experimental. And hasn't been fully tested. Its been twenty days since the COVID-19 vaccine rollout began and there have been numerous cases of people dying and having severe reactions to the shot.

And now the mainstream media is pushing the 'vaccine shortage' narrative. Big Pharma along with the government and media use this tactic to trick people into wanting the shot.

Its a tactic they've used before. It gives the illusion that there's a shortage because so many people have already taken it. It also pushes the narrative that herd immunity won't be achieved setting the stage for future lockdowns and an endless pandemic.

I can't verify whether this alleged vaccine shortage is legit, but my educated guess would be that it isn't. Or that it is being done on purpose in order to perpetuate the pandemic restrictions. It is similar to the 'hospitals overloaded' lie. That has been proven false multiple times, but at a cost. A women in the UK was actually arrested for filming an empty hosptial. We have entered the era of total information control. It is becoming harder to combat these false narratives due to the massive censorship online.

I CAN verify that there was an over-abundance of COVID-19 vaccines available during the rollout.

Its hard to believe that with this "extra" supply of vaccines available, horror stories of people dying after receiving them and only half the public willing take the shot that there would be a shortage. That's the logic I'm applying here.

In the eyes of our masters the peasants are going to take their vaccines whether they want to or not. Either through fear, misinformed consent or coercion. And while they opt for the saline water shot on live television you'll be getting the good stuff... The DNA altering, neurological damage inducing and sterilizing causing shot.

Its kind of like a form of blackmail with a twist of torture. Take your vaccine or you will never go back to normal. But the head-trip is that they are actually telling you even if you take the vaccine and comply with all these ridiculous restrictions and mandates you will not go back to normal. The rise in suicides and psychological disorders is the result.

That's how evil these people are. They understand that these actions taken in the name of ending the pandemic will injure and kill more people than the 'pandemic' itself.

Joe Biden has said he'll get "at least 100 million COVID vaccine shots into the arms of the American people" during his first 100 days. But before his term begins, some advisers are reportedly worried this promise will ultimately be broken.

"At a pace of 1 million doses a day, the virus wouldn't be contained until sometime in 2022," Peter Hotez, a vaccine expert at the Baylor College of Medicine said.

Its pure coincidence that he would say that because Dr. Bill Gates, a well known expert in the field of epidemiology said lockdowns could continue into 2022 before the vaccines even arrived.

Its almost as if he had a psychic premonition. Dr. Fauci is trained in the mysteries as well. His dark predictions often come true.

As I've stated before the goal is to drag out this fake pandemic for as long as possible. I'm basing that off what the 'experts' are actually telling us.

He says there is good reason to expect a need for ongoing booster shots to protect against mutations that could propagate other variants of SARS-Cov-2, the virus behind the global COVID-19 outbreak.

The article states the obvious. People will gain immunity over time and the virus will be as deadly as the common cold. The only problem is that COVID-19 was never deadly. You literally have 99% chance of surviving and 95% chance if your old and sickly.  The article tries to tie the 'vaccine shortage' to not achieving herd immunity for unforeseeable future.

Mind you. Even when they vaccinate 99% of the planet they will still say we have not achieved herd immunity because that will mean the pandemic is supposedly over and we can return to normal again. That can't happen.

Even if you are naive and believe the experts, the vaccines don't prevent the spread of COVID-19. This is a fact. Actually they will increase infections. If they did 'work' they only last for 6-8 months which means you will have to get one 1-2 times a year. Given that all viruses mutate, by the time a vaccine rolls around it will be useless. I personally know they are already useless and do more harm than good but I'm playing devils advocate here.

This isn't going to end because it is not meant to end. If you put your faith in the mainstream media, hand picked health experts like Fauci you will be let down. All hope is gone.

There's a reason we are told that we must still wear mask and socially distance and get tested after being vaccinated etc. Because it gives the impression that there's actually a dangerous pandemic when there isn't one.

Be prepared for the long haul. Never-ending pandemics. It will only end when another begins. (Whenever they decide to conjure up a new one in a laboratory and release it.) Perpetual mutations and new strains of COVID conveniently popping up after a 'long awaited' vaccine finally arrives. Never achieving herd immunity. Never- ending calls for mass vaccinations.

By the way, we achieved herd immunity in March 2020 when we all went into lockdown. Its good to know this has all been for nothing.

I leave you with this: