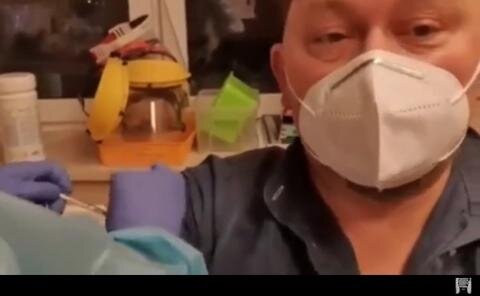 'His death had nothing to do with getting the second dose of the vaccine,' said the doctor's daughter.

WARSAW, Poland, March 12, 2021 (LifeSiteNews) — A Polish doctor who was filmed mocking COVID-19 vaccine skeptics as he was inoculated died 19 days after getting his shot.

Dr. Witold Rogiewicz of the OVI (VIP) Infertility Treatment Center in Warsaw received two shots: one on January 4, and the second on January 26. As he took the second inoculation, Rogiewicz made jokes at the expense of “anti-vaxxers,” COVID-19 and 5G skeptics, and people with autism. The video of his message has been published widely in Polish online media and on social media.

“Get vaccinated to protect yourself, your relatives, friends, and patients, too,” the gynecologist advised in Polish.

“Just to mention, I also have information for the anti-vaxxers and COVID skeptics; if you would like to get in contact with Bill Gates, you can do it through me. I can also lend you the 5G network in my body,” he continued, presumably referring to rumors that Gates funded projects to link vaccine records to a “tattoo” or microchip and those

The doctor then took aim at Dr. Andrew Wakefield’s controversial theory that autism in children might be caused by the MMR (measles, mumps, and rubella vaccine). “Pardon me if I didn’t say something there for a moment, but I was just coming down with autism,” Rogiewicz said.

The doctor died of heart failure, just over two weeks later, on February 15. His fellow clinicians posted a notice saying that he had died, expressing their shock and sorrow and offering condolences to Rogiewicz’s family. The fertility clinic’s website also bears the lightning symbol of Poland’s pro-abortion movement in the top right-hand corner.

The story of the gynecologist who poked fun at those who oppose vaccines while being vaccinated, and died shortly thereafter, made the rounds of Polish social media. Critics of Poland’s COVID-19 vaccination program connected his death to his inoculation. However, Rogiewicz’s daughter denied that he had died from the vaccine.

“Over 2,000 comments about what happened appeared under the post about Dad’s death: that he mocked anti-vaxxer[s], and he himself died after being vaccinated,” Małgorzata Rogiewicz told Polish Newsweek magazine last month. “Dad had problems with his heart for many years, and he died suddenly of a cardiac arrest.”

“His death had nothing to do with getting the second dose of the vaccine,” she claimed.

Rogiewicz stated that her father had felt fine after receiving the second shot, and that she herself had been vaccinated. “There were no side effects for either me or my dad,” she insisted.

From the record shown in Dr. Rogiewicz’s video, it is clear that he had been inoculated with the Pfizer vaccine under the brand name “Comirnaty.”

The use of the Oxford/AstraZeneca vaccine has been suspended in three European countries, and suspect batches have been suspended in others after a number of deaths and dangerous blood clots occurred in relatively young people after receiving the vaccine. Both the British and European medicine regulators have told the public that there is no evidence that the deaths and blood clots were caused by the vaccine.

According to the Catholic Polonia Christiana magazine, the Polish government has no plans to suspend the use of the Oxford/AstraZeneca vaccine.

I can't get the You Tube video embedded into this article so here's the link: